Once again, my cocktail inspiration comes from my love of the silver screen. This time it is the classic French film noir “Les diabolique”. It doesn’t surprise me that there is a Diabolique cocktail, but what I wasn’t aware of is that the film is based on a book, so this ties in perfectly with my unofficial film/book/cocktail theme.

This fruity little number used up the last of my pineapple juice and, given the theme of the film, felt suitably spooky for the Halloween weekend when I enjoyed it. I differed a little from the recipe that I found for the Diabolique cocktail because it recommended shaking all the ingredients over ice at the start. A little something that you should know about pineapple juice is that it froths up. A lot.

If you shake it with ice straight away, I find that the liquids don’t mix together very well. For this reason, and it’s the same with any cocktail that uses egg white: I always dry shake the liquids before adding the ice. You do have to be careful when you go to add the ice that you don’t end up spilling half of your cocktail all over you or the bar though.

The other deviation from the recipe was drizzling the blackcurrant syrup into the poured drink rather than shaking some crème de cassis it in with the vodka and pineapple juice. There were two reasons for this. The first was I knew that I was going to get a good head on the Diabolique cocktail so thought that it would be fun to try and draw a spooky symbol on the top of it. The second has to do with a key plot point in the film. You won’t find any spoilers here, so if you want to know what I’m talking about, you’ll have to either watch the film or read the book. 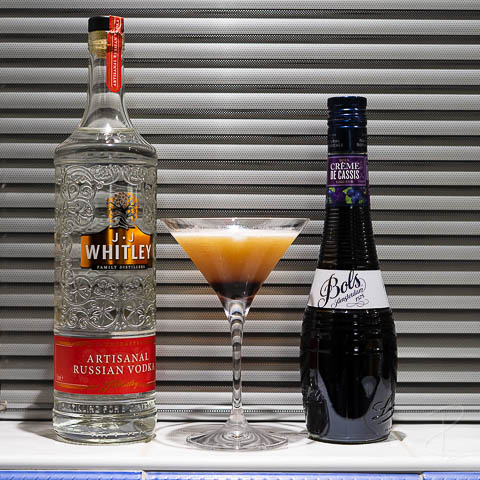 METHOD
Dry shake the vodka and pineapple juice. Add ice and shake again. Pop a cocktail cherry into a chilled cocktail glass and strain the cocktail over it. Drizzle over some blackcurrant syrup and enjoy with devilish glee.