2001: A Drinks Odyssey – A cocktail that aims for the stars

I seem to be on a bit of a film and book cocktail tie-in at the moment. It’s completely unintentional, but sometimes it’s good to have a bit of a theme.

The real reason I chose the 2001 cocktail is because I had a bottle of pineapple juice to use. Now the obvious option would be something like a Pina Colada or a Pineapple Mojito, but I didn’t fancy either of them. Rum sounded like a very good idea though.

Whilst I do enjoy a good tiki drink, I can find them a bit sweet. As a result I tend to prefer a dark rum rather than a white or coconut rum. The recipe for the 2001 cocktail originally called for a golden rum, but I have a slight issue with mixing my 3 year old Havana rum into anything other than a classic Mojito. Instead I used a combination of both Lamb’s Spiced and Lamb’s Navy rum to dial down the sweetness and add a bit more depth to the cocktail.

Alongside the single measure of rum, and double pineapple juice, the original recipe for the 2001 also half measures each of apricot brandy and crème de cassis. I felt that would make quite a sweet mix, but I much prefer my cocktails to be more on the dry side. With that in mind, I doubled up the rum and the only thing left to do was say “Open the ice box doors HAL…” 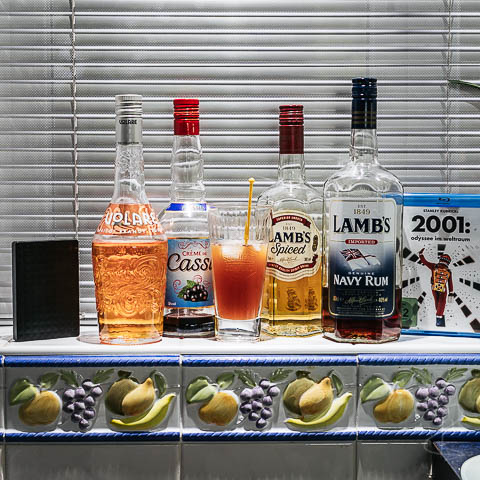 METHOD
Pour ingredients into an ice filled cocktail shaker and shake it vigorously. Strain into a chilled cocktail glass and garnish with a good dusting of cocoa powder.