I love an Espresso Martini. It is often my tipple of choice with my after dinner cigar. I enjoy changing it up too by swapping out the vodka for tequila to make it a Mexican Espresso Martini or by using vanilla vodka and adding in some butterscotch liqueur to turn it into a Salted Caramel Espresso Martini. The Mokito Cocktail is another variation that uses spiced rum as its base.

When I was invited to chat live with Madeleine for a second time, I chose to smoke a Romeo y Julieta Petit Churchill. As this cigar is a light and floral one with hints of toffee, I wanted a cocktail that would allow the delicate flavours to come through, but also provide an interesting contrast. Knowing that an Espresso Martini works with a lot of cigars I decided to take this as my base drink and change things up.

The Mokito Cocktail recipe that I found called for a strong espresso. Knowing the a little bit about flavour profile of the cigar that I was going to smoke, I knew that a strong coffee would overpower the gentle taste of the Romeo y Julieta. Instead, I opted for a lighter strength espresso with floral notes. This would pick up on, and therefore enhance, the similar flavours in the cigar.

Rather than the traditional vodka, alongside the coffee in the Mokito Cocktail was spiced rum. This would be perfect to play off the lighter notes and leave enough of a tingle on my tongue to allow the subtle flavours from the cigar to shine through. The final spirit was amaretto. This took the place of coffee liqueur which would have well and truly overpowered the cigar. As it was, the almond flavour played beautifully against the dried fruit in the opening third of the Romeo y Julieta Petit Churchill.

Garnishing the Mokito Cocktail with a generous squirt of whipped cream and a sprinkle of cocoa and cinnamon really lifted the drink to the next level and allowed the flavours from both the cocktail and cigar to sing in harmony. This was a beautiful pairing of cocktail, cigar and company. 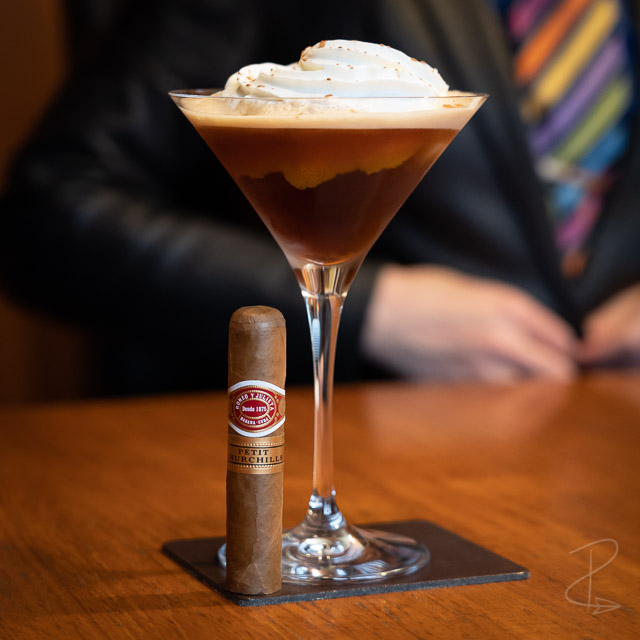 METHOD
Pour the coffee, rum and amaretto into an ice filled cocktail shaker and shake it vigorously until a frost forms on the outside of the shaker. Strain into a chilled cocktail glass and float the cream on the top. Garnish with a good dusting of cocoa powder and cinnamon.