The Port Antonio may not be a classic cocktail, but it is a variation on one – the Daiquiri. A lot of rum cocktails call for fruit juices so they end up being rather on the sweet and fruity side. Whilst these are nice from time to time I much prefer my cocktails to be tarter and more savoury.

When I want a rum cocktail, I tend towards a classic Daiquiri if I’m after something short or the Mojito if I want a long drink. Both of these err away from the sweet and fruity and are much more my style of drink. I do tend to reduce the amount of simple syrup or sugar that I use in both of these classic cocktails so when I found the Port Antonio, I jumped right in to mixing one up.

Where the both the Mojito and Daiquiri ask you to directly mix together lime and sugar, with the Port Antonio you mix the rum and lime juice then garnish with grenadine allowing you to let it settle to the bottom where you can mix in as much or as little sweetness as you want while you drink it.

I ended up making myself three Port Antonio cocktails with three different rums. The first one, I used Bacardi white rum, the second Havana Club 3 year old and the final one with Mount Gay. Of the three variations, my preferred one was the Havana club. I found the Bacardi was rather overpowered by the lime juice giving the cocktail a rather flat flavour. The Mount Gay gave a much richer flavour but didn’t balance as well with the lime juice as the Havana club did.

I know that the picture of the ingredients has white rum rather than my preferred golden rum, but I forgot to take a picture of the second and third versions of this cocktail. It might have had something to do with making and drinking the cocktails in rather quick succession.

As with other classic cocktails such as the Daiquiri, Mojito, Martini, Negroni and Godfather, the Port Antonio is another drink that can be personalised according to your taste. The taste of it definitely alters depending on the rum that you use as well as just how sharp your limes are. I think some more experimenting may be necessary. 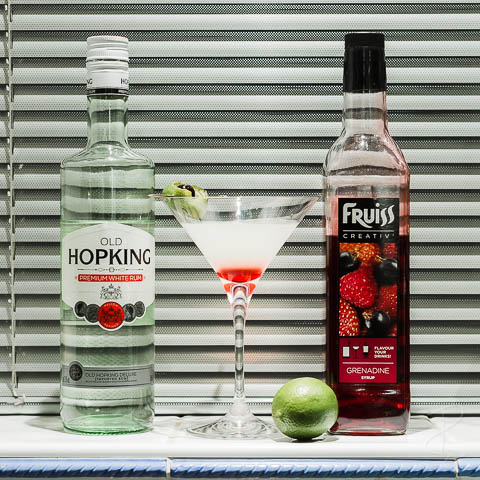 METHOD
Shake the rum and lime juice over ice then strain into a chilled cocktail glass. Drizzle in the grenadine and garnish with a cocktail cherry and lime zest.